Arthur Jones is a 70-year-old retired insurance agent & a perennial losing candidate in races in Illinois and also in Wisconsin dating back to the 70’s, was the only person to qualify for the Republican primary in a heavily-Democratic 3rd District.

The 70-year-old Jones first ran for office in 1976, when he ran for mayor of Milwaukee. The retired insurance salesman, who lives in Lyons, has run for Congress in the 3rd District in 2006, 2008, and 2012, losing the Republican Primary each time.

The Illinois GOP has condemned Jones and his run for public office.

“We strongly oppose his racist views and his candidacy for any public office, including the 3rd Congressional District,”

The Illinois Republican party has successfully challenged the signatures Jones gathered to get on the ballot in the past. But this time, both the party and Jones’s two possible Democratic opponents have said that his signatures appear to be valid.

Arthur is the only GOP candidate on the ballot for the 3rd District. But isn’t likely to win the race with the district be mainly blue in a blue state, the upcoming elections are on March 20th.

Arthur Jones is a long-time neo-Nazi, based in Illinois, who has been involved with anti-Semitic and racist groups since the 1970s. He has participated in numerous extremist events, including neo-Nazi rallies and celebrations of Adolf Hitler’s birthday throughout his career.  Jones is also a Holocaust denier who has said that the Holocaust is a lie “and nothing more than an international extortion racket by the Jews.”

Most recently, in September 2011, Jones attended a rally in Wisconsin held by the neo-Nazi National Socialist Movement (NSM), the largest neo-Nazi group in the country.

Between 2008 and 2011, he participated in events in Illinois that celebrated the April 20th birthday of Adolf Hitler.  At the event in 2011, Jones told a reporter that the group was also celebrating the start of the American Civil War in April 1861. In addition to a birthday cake dedicated to Hitler, the group reportedly had a second cake containing the logo: “The South Was Right. White Men Fight.”

Jones gave a speech last year at a gathering of the National Socialist Movement, which the Southern Poverty Law Center called one of the “most prominent neo-Nazi groups in the United States.”

In his speech, Jones said he was sorry he voted for President Trump, who “surrounded himself with hoards of Jews” like presidential advisor/son-in-law Jared Kushner.

Jones has also received support from the popular White Nationalist websites, Storm Front. That’s the type of people and support this candidate is attracting. 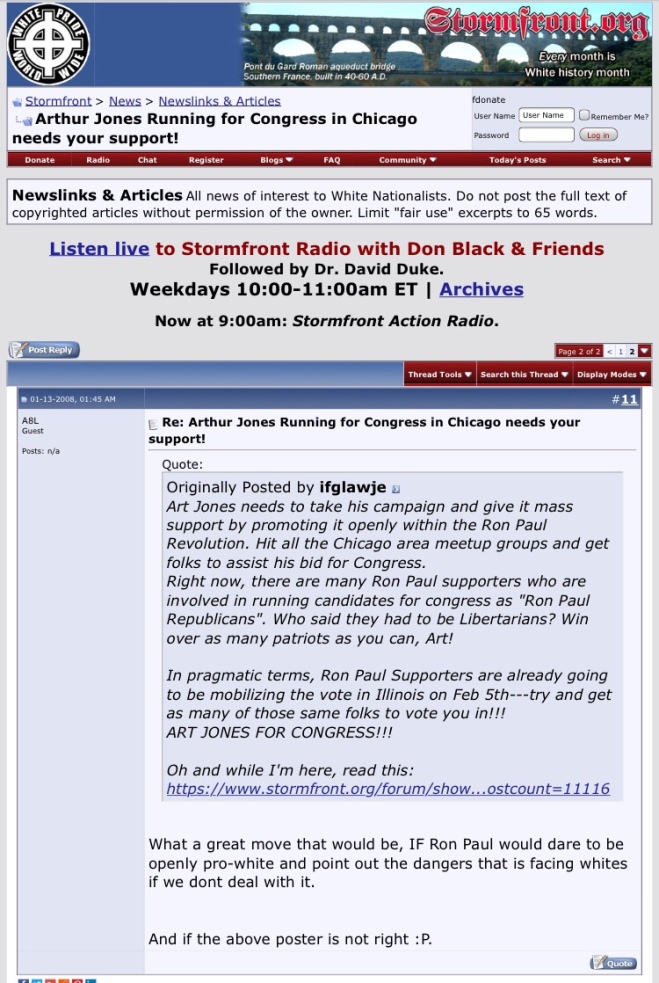 Hopefully when March 20th comes the people get to the ballot boxes to let their voices be heard. The Americans beat the Nazis once, yet we see them marching on our streets now.