Dynasties are something that never seem to disappear, no matter what form of government any nation has. From the era of autocratic rule in ancient times, where the elites hand-picked their leaders among themselves, to the days of absolutist monarchy by handing down the crown, and now during the age of democracy in the United States. The curtains have closed on the three most influential and powerful dynasties; Kennedy, Bush, and Clinton families. Their time in the spotlight has come to an end. With John F. Kennedy and Robert Kennedy being assassinated, the Bushes in retirement, and last plausible Clinton presidential-hopeful having lost the 2016 election… who’s next? The Sanders family is.

As of February 27th, Bernie Sander’s stepdaughter and son are officially running for elected offices. His son, Levi Sanders, is running for the congressional seat in New Hampshire’s 1st District, eager to replace the retiring Democratic Representative, Carol Shea-Porter. Levi has made his platform and agenda clear: Medicare-for-All, free tuition at public universities, and higher minimum wage. However, Levi Sanders is running as a Democrat, unlike his father. 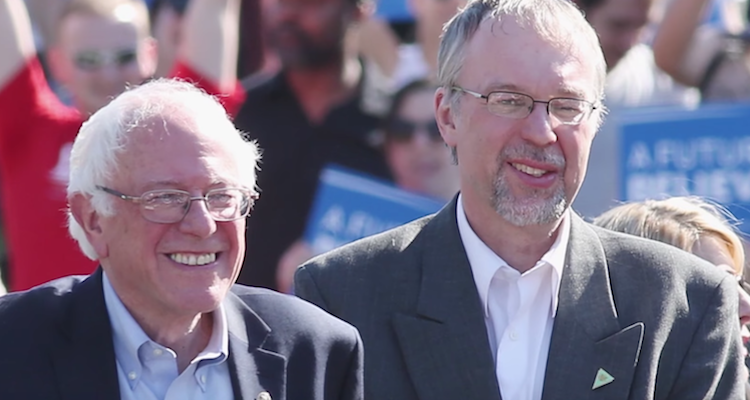 His stepdaughter, Carina Driscoll, is running for Mayor of Burlington, Vermont. Sound familiar? It should, that’s where Bernie’s political career began. She is running on an equally progressive platform, although, as an Independent. She is looking to unseat the incumbent Democratic Mayor.

For the first time, in possibly a very long time, we have a family in the political spotlight with crystal clear dreams of helping the American people, actual progressive goals. We don’t have a family embroiled in scandals, a family embroiled in war profiteering, corporate/Wall St. ties, or fear-mongering. We have a family with a set of values. American values. These are two individuals that should be watched closely, because they could very well be future Presidential contenders. They’re both beginning their political careers on the right path, and of course, with the advantage of substantial name recognition.

Many of us; Democrats, Republicans, Independents, Greens, know Bernie Sanders will probably run for President again in 2020. There are rumors flying around that Joe Biden will run too, for he’s met with old staffers and advisors, and those rumors include him serving for one term. The idea is to let his running mate take over, and give us another 8 years of a Democrat, totaling at 12. I see why he wants to do that, and why he’d only stay on for one term, but I highly doubt Bernie Sanders will be his running mate, or Elizabeth Warren. It’s boiled down to who’s really fit for the job? Who has the foresight, judgement, and experience? Who do we need now?

Age has been a big player in determining if a man or woman is fit to lead the nation. Do they have the energy? Do they have the stamina? The fact is, our greatest progressive champions, with considerable influence in the federal government, are older individuals. Bernie Sanders will be 79 on Inauguration Day 2021, and Elizabeth Warren will be 71 (Joe Biden will also be 79). I completely understand that it’s likely Joe Biden’s dream to become President, and in no way am I promoting the idea of not pursuing your dream. But there’s a time and place for everything, and at this stage in American politics, I don’t think this country can last longer on bits and crumbs of incremental change.

Levi Sanders and Carina Driscoll have a unique figure in their lives to look up to, and I’m sure they do 100%. They have a man who’s honest and radiates integrity that is the head of their family. Based on a first impression, I believe they are just as honest as Bernie Sanders. We as Americans are infatuated with celebrities, having a person or family to look up to. It’s what keeps the monarchy of England going, it is a symbol for all families to aspire to be. In America, we don’t have that, so we clung onto the closest thing we could get. The Kennedys, Bushes, and Clintons (with the last two, for the wrong reasons).

If Bernie Sanders becomes the 46th President of the United States, the Sanders family will be that next dynasty. They have a core set of values that majority Americans agree with. Values that center on embracing diversity, eradicating income inequality, establishing progressive taxation, health care as a right for all, and not drowning in student debt for going to college. A Sanders Administration would prioritize compassion and strength, something not seen by most presidencies. And with the family members of the most popular politician in America running for office, we know that this will be an “unofficial dynasty”. There is no intention of Bernie Sanders dictating the campaigns of his son or stepdaughter, as he mentions in a short section in an article by NPR, it is their campaign, their own agendas.

What do you think? If Levi Sanders and Carina Driscoll win their respective races, do you think they’ll aspire more and follow the steps of Bernie? Can the country afford another political dynasty? Or is this an exception?

This is the article by NPR on which Bernie comments on his son’s decision to run for Congress: