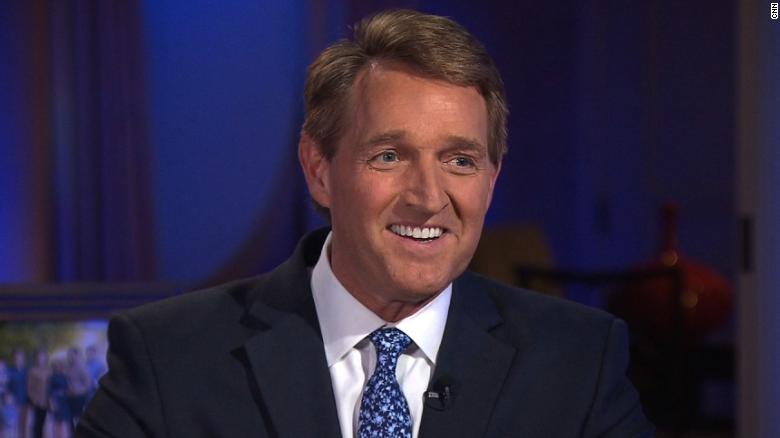 Those are the words of Senator Jeff Flake of Arizona, speaking at the National Press Club, who has lately been calling for a restoration of civility and humane behavior to American politics, as well as a reevaluation of support of President Donald Trump. The Senator from Arizona is one of the few moderates remaining in the Senate, as well as one the very few non-radical members of the Republican Party that has succumbed to extremism.

“If we are going to cloister ourselves in the alternative truth of an erratic leader, if we are going to refuse to live in a world that everyone else lives in … then my party might not deserve to lead…” stated the Senator.

Jeff Flake is an open-minded individual who sees and understands that the words, actions, and behavior of this Republican President and Republican Congress are taking a toll on America’s values and even our stability as a nation. The Senator has decided not to run for re-election in 2018, opening a path for a Democrat to take his place.

Senator Flake even mentioned that his party seems to have a case of amnesia when it comes to all the issues our country has faced in modern history, and seemed to be happening all over again. Just in time for the Senate’s passing of the banking deregulation just a few days ago, about ten years after the Great Recession of 2008 (when the big banks had free reign). The Republican Party does, in fact, have amnesia, or more so selective memory.

The Reagan tax cuts in the 80s failed, as did the Bush tax cuts in the 2000s, which led to our 2008 recession in the first place. The real situation here is that these members of Congress pushing for tax cuts and deregulation of the financial industry aren’t stupid, they aren’t ignorant of the past, they are being paid by their corporate donors to do so. The rollback on major parts of the Dodd-Frank financial regulations (which were implemented after the 2008 crisis) was approved by 67 senators. Republicans only have a majority of 52 seats, clearly showing some Democrats voted for the bill as well.

Although Flake’s speech wasn’t directed at this bill deregulating the banks, or specific policies, it was more about the principles of the Republican Party. He’s stated, “Never has a party abandoned, fled its principles and deeply held beliefs so quickly as my party did in the face of the nativist juggernaut…We have become strangers to ourselves.” The Republican Party has fallen from its grace, fallen from a position of upholding fiscally conservative and traditional values. Becoming a party that divides, a party that chooses profit over people, and chooses the NRA over lives. And instead of condemning the racist and idiotic statements blatantly spoken by our President, they go along with it.

A big problem is institutionalism. The institutions of our federal government, specifically the legislative and executive have become far too intertwined. The party that has a President in power have become too complicit to what the President says or does. Yes, they have every right to pursue their agenda, but it’s become more about blind loyalty. Yes, a member of Congress may fear that if they go against the will of the President (of that same party) the party leadership will effectively ruin their career by supporting a challenger. However, if more Senators and Representatives spoke up, they can’t all be replaced.

We don’t know if Jeff Flake really has the courage, to criticize Trump and the GOP, or is just doing it because he knows his career in Congress is over. Far too many members of Congress have become servants of the Party, not servants of the people, which is what their job is. They are representatives, they are supposed to represent our views and ideals, not solely do what the Party commands. Senator Flake is right, we have become strangers to ourselves, all these problems are converging together to make a heaping mess for our country and our leaders choose not to deal with them.