Today Netflix & Media rights capital announced that they will pull the cord on ‘House of Cards’ after season 6. This news comes less than 24 hours after the Star Trek Discovery,  Anthony Rapp, star first made public his allegations on October 29 of what happened at a party at Spacey’s New York apartment back in the 1980s. Today Media Rights Capital & Netflix released a public statement.

“Media Rights Capital and Netflix are deeply troubled by last night’s news concerning Kevin Spacey,’ said the companies in a joint statement today. “In response to last night’s revelations, executives from both of our companies arrived in Baltimore this afternoon to meet with our cast and crew to ensure that they continue to feel safe and supported. As previously scheduled, Kevin Spacey is not working on set at this time.”

Rumors going around about Netflix’s Spacey starring film ‘Gore’ about the acerbic author Gore Vidal may be the next project of Spaceys on the chopping block now too. There has yet to be any word of NYPD investigating these claims. Yet it should be suspected as this incident took place in their jurisdiction back in 1986.  Rapp claimed that the then 26-year old Spacey drunkenly put the then teen on a bed to “seduce” him. “I was aware that he was trying to get with me sexually”.

A Federal grand jury has approved the first charges in the investigation led by special counsel Mueller. Arrests are expected for this coming Monday. Rumors going around are expecting Manafort 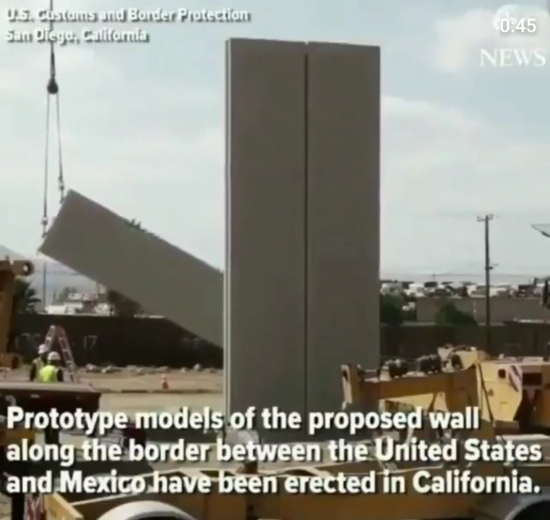 In 2015 the initial proposal of the “big, beautiful, see-through and inexpensive wall that would be paid for by Mexico” created a barrier of its own between those in favor and those opposed. In July of 2017 after two years of heated debate 45 proposed a bill allowing $1.6B to complete a Tactical Infrastructure designed to protect 1,000 of our 2,000-mile border. It was passed by the house 235-192. Then later in October to the surprise of many, another bill was approved by the House Homeland Security Committee for $10B American tax dollars to construct the wall. We cannot let this bill pass on the floor.

Will this budget continue to grow out of control? A MIT Tech specialists review of the budget states it impossible at  50′ tall – 10′ underground – 1000 miles long the budget would look more like: $9B for concrete – $4.5B for steel – $15B in labor For a grand total of $28B. What some may forget is there is already a 700-mile long fence along the border that has already cost us $2.3B in taxes. The fence was set in place in 2007 by George W. Bush, complete with barbed wire and infrared cameras. The kicker is the feds still owe former landowners for the original buyouts ten years ago. The U.S. also already spends more on Mexico’s border security team than any other federal agency in the states.

Given the current state of affairs in our great nation is it really ethical to support this budget? In 2017 a mere $69B was put into the education system, while almost $700B went to military funding. As a country who spends almost 100 times more on the military than education, priority matters need to be assessed and addressed first. The hundreds of thousands left homeless from the recent disasters reaching coast to coast and beyond still need basic things like water and shelter. Ask yourself if passing this bill is humane, we need bridges, not walls. Bridges for the gaps in wealth & social inequality and most importantly for the gaps in education.

The government held a special cabinet meeting to approve Article 155 and impose direct rule on Catalonia.

Mr Rajoy said regional elections will be held within six months in the separatist Catalan province and wishes to remove the current leadership.

The plan still needs to be approved by the upper house: the Senate.

It comes after a deadline earlier this week that gave Catalan President Carles Puigdemont a chance to declare a regional election or vie for independence.

Mr Puigdemont ended up doing niether, instead asking for negotiations as he had been requesting for nearly a week.

On Oct 1, an independence referendum was held that produced a pro-separatist result despite national police violence on the day of.

Puigdemont said on Oct 10 the results gave him a mandate for independence and a declaration was signed by the Catalan leadership.

However, the declaration was put on hold as Puigdemont called for dialogue with Madrid to enter into a process for separating.

The Spanish central government has ignored the request for talks, considering the referendum and independence movement illegal.

More details to follow.Image 1 of rallies in Catalonia from Berning Media Network.

Quebec’s parliament passed a law that forces Muslim women from wearing religious coverings, such a niqab or burka, while using public services including public transit on Wednesday morning.

Bill 62 was voted into life at Quebec’s National Assembly in Montreal and requires that citizens giving or receiving public services must do so with their faces uncovered. It encompasses provincial and municipal services.

Federal services are still allowed to be utilized while wearing religious coverings.

Th Quebec government is held by the Liberal Party, but one that is drastically different than its federal counterpart led by Prime Minister Justin Trudeau.

More details to follow. Image 1 of a Muslim student in Germany in August 2016 from the Independent.

Hundreds of faculty, students and supporters turned out to a strike solidarity rally at Humber College’s Lakeshore campus.

Speeches, performances, and chants dominated the one-hour long event held on 23rd St meters down the pavement from Lake Shore Blvd. Those engaging the masses stood on the back of a pick-up truck organizers said had been provided by the union.

JP Hornick, chair of the college union negotiating team, went through the history of negotiations this year in a speech that includes chants and a message of support.

Hornick said that if the Ontario Public Services Employees Union gave into college demands at any point earlier this year the deal would not have a solution.

The OPSEU negotiator said the College Employer Council had spent this week attempting to “bully” the union team. Hornick explained that on Thursday the Council had threatened to let the strike go on for six weeks.

The rally master of ceremonies Pam Johnson said, picketing has been scheduled for outside Debbie Matthews’ office, the Ontario government minister in charge of the post-secondary portfolio, next Wednesday.

At 7:30 am on Oct 25, all picketers from across Toronto’s colleges will convene at 90 Bay St for the protest outside Matthews’ office, with a massive rally scheduled for 11 am.

“Of course we want both sides to get back to the table,” Matthews said earlier this week.

However, Hornick said that while a parliament bill numbered 148 was a step in the right direction, it was not enough to address what OPSEU is seeking for teachers, librarians and counsellors that are part of the union.

Due to a deadline passing for negotiations between OPSEU and the Ontario Employers Council on Sunday, a strike came into effect on Oct 16 for Ontario’s 24 public colleges. Since then, faculty have been picketing unable to enter their schools.

James Compton of the Canadian Association of University Teachers, who is in Toronto for a conference on staff contracts, said that “your issues are our issues.”

Compton expressed solidarity on behalf of the college faculty’s counterparts in the university stream, saying that contract security is a struggle across Canada.

“We are with you until the end,” Compton said.

Energy at the rally was high for its majority, but perhaps its pinnacle came near the end when Mohammed Ali the “Socialist Vocalist” took to the pick-up and rapped out nearly ten minutes worth of smooth bars on union’s and employer mistreatment.

Ali spoke to workers’ issues across Canada as well as some specific to education.

What are the union demands?

According to a pamphlet made by two college librarians, there are five reasons faculty are on strike.

The first bullet point is the headline “we need more full-time faculty”, the top sticking point for a majority of union members the Post has questioned. The union says full-time faculty numbers are decreasing while the student population increases year-to-year.

Likely the biggest issue raised during Friday’s rally, and second on the pamphlet, was that contract faculty members need job security.

Those on contract need to re-apply every semester to continue to hold a job, and a majority of college faculty are on this system.

Rally MC Johnson said that she has been a contract faculty for 18 years, with others even longer. This was met with boo’s and jeers.

Number three on the list is equal work deserving equal pay. Faculty that aren’t full time are not being paid for the time they spend preparing for courses, marking academic submissions and out-of-class support.

Paula Greenberg told the Post at the rally that many teachers in her Child and Youth Services program at Humber College worked in their field as well as teaching, as they were not employed full-time.

“Quality of life for my teachers is important because it effects my education,” Greenberg explained.

She said with part-time faculty they didn’t have enough time to properly “address questions, meet students outside of class and explain lectures”, causing both the teacher and the student stress.

Magner called on a “Senate or some way to craft academic work.”

Mohammed Ali had also touched on that, saying that he had seen success at Ryerson where both faculty and students had input on their academic content.

The reason for why Ontario college faculty are on strike is that the ratio between counsellors and students need to be balanced for the sake of the students.

Strikers say the college administrations are now “moving to outsource” the work of counselors, which OPSEU says gives “less accessibility to adequate and meaningful mental health coverage for students.”

Andrea Babbington of the Toronto and York Region Labour Council told those gathered that she applauded their courage in “standing up to the boss.”

Babbington said the Ontario Federation of Labour supported the strikers in their fight against the “exploitation of the worker” and encouraged the masses to “keep up the fight, sisters, and brothers!” 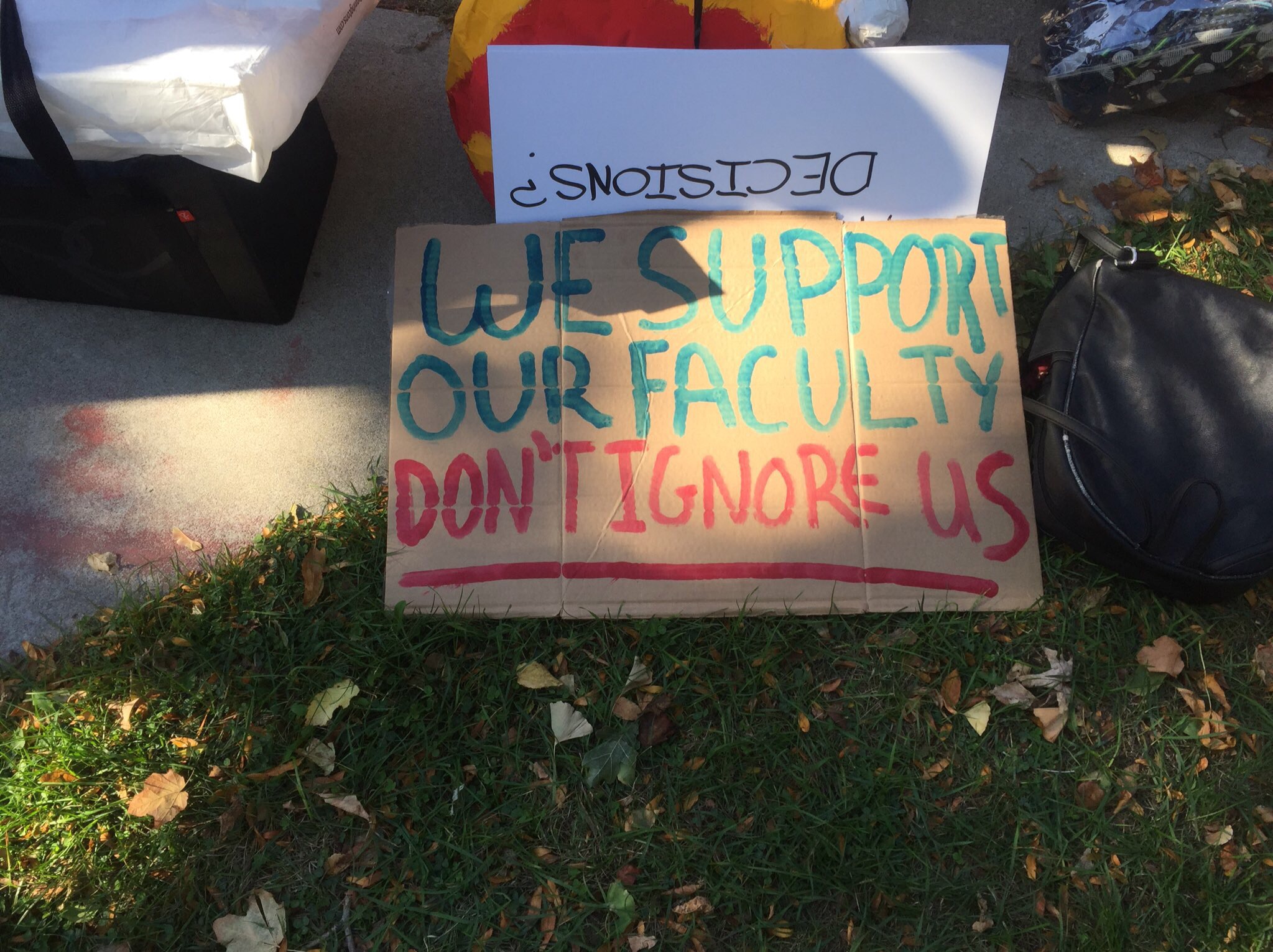 College students came out in droves to the rally on Friday, with a group called “Humber Voice Now” performed a rendition of the popular Queen song “We Will Rock You”.

The students replaced the chorus line with “we want classes” in support for a return to the bargaining table and an end to the strike.

A Change.org petition started by two Humber students has accumulated over 93,000 signatures asking to end the strike and get a refund for the missed days.

Several faculty that the Post connected with at the rally said they agreed with the refund for students.

The Post asked the union representing the university faculty at Guelph-Humber if there would be a chance of a refund for GH students. The response was a firm “no”.

Students have been active on picket lines at all 24 public colleges, with some even starting their own petitions in support of strikers.